46. Thomas Lygon, second son of William Lygon and his wife, Eleanor Dennis, is said by Smith in his "Lives of the Berkeleys" (Vol. ) 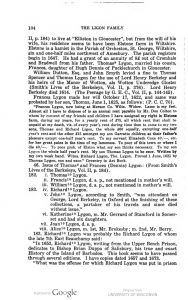 II, p184) to live in Elliston in Gloucester", but freom the will of his wife, his residence seems to have been Elstone farm in Wiltshire.  Elstone is a hamlet in the Parish of Orcheston, St. Goerge, Wiltshire, six and one-helf miles northwest of Amesbury.  The parish registers begin in 1647.  He had a grant of an annuity of 8£ out of Cromhale and Bradwell from his father  Thomas Lygon, married his cousin, Frances, daughter of Hugh Dennis of Pucklechurch in Glouchester.
William Dutton, Esq and John Smyth levied a fine to Thomas Spencer and Thomas Lygon for the use of Lord Henry Berkeley and his heirs of the Manor of Wotton, als Wotton Underedge Gloster (Smith's Lives of the Berkeleys, Vol. II, p. 376).  Lord Henry Berkeley died 1614  (Teh Peerage by G.E.C., Vol. II, p. 144-145)
Frances Lygon made her will October 17, 1622, and same was probated by her son, Thomas, June 1, 1625, as follows: (P.C.C.70).
"Frances Lygon, now being at Merson Co. Wilts. WIdow. Lame is my feet. Almost all I have to dispose of is an annual reant payable by Mr. Don Colton to whom by consent of my friends and children I have assigned my right in Elstone farm, during my years, for a yearly rent of £75, all of which rent that shall be unpaid at my death, viz. of every year's rent during time then to come to my two sons, Thomas and Richard Ligon, the whole £60 equally, excepting one-half year's rent and the other £15 amongst my son Garratts children at their father's pleasure except one-half year's rent  To my servant Elizabeth Coxe 40/-, etc. for her great pains in the time of my lameness.  To poor of this town or where I die 40/_. To poor prsh. of Elston what my son thinks necessary.  To my son 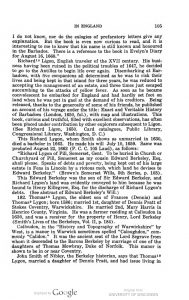 I do not know, nor do the eulogies of prefaratory letters give any explanation.  But the book is even now curious to read, and it is interesting to me to know that his name is still known and honoured in the Barbados.  There is a reference to the book in Evelyn's Diary for August 16, 1668."

Richard Ligon, English traveler of the XVII century.  His business having been ruined in the political troubles of 1647, he decided to go to the Antilles to begin life over again.  Disembarking at Barbadoes, with five companions all determined as he was to risk their lives and being kept in that island for three years, he was reduced to accepting the management of an estate, and three times just escaped succumbing to the attacks of yellow fever.  As soon as he became convalescent he embarked for England and had hardly set foot on land when he was put in gaol at the demand of his creditors.  Being released, thanks to the generosity of some of his friends, he published an account of his voyage under the title: Exact and Veritable HIstory of Barbadoes (London, 1950, fol), with map and illustrations.  This book, curious and truthful, filled with excellent observtaions, has often been placed under contribution by other explorers subsequent to Ligon. ..
This Richard Lygon, whom Smith shows as unmarried in 1630, died a bachelor in 1662.  He made his will July 10, 1659.  Same was probated August 22, 1662.  He made his will July 10, 1659.  Same was probated August 22, 1662 (P.C.C. 105 Laud) as follows: