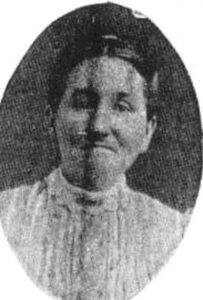 This information was collected from Bertha A. Maples, Beatrice A. Harper, Herman Barnes Aycock and William Walter Harper:

She received her early schooling with neighbor children in one of the homes which was taught by a “hired” teacher.  Her later schooling was received in Pinkney, Wayne County, North Carolina where because of her distance she boarded with the Michael Edgerton family.  She helped with the housework in exchange for her board.  They had a large family of boys so there was lots to do.

On February 1, 1883, Bettie married Thomas Ruffin Aycock in Kenly, North Carolina.  Thomas’ father, Barnes Aycock had traded his land between Pikeville and Goldsboro, North Carolina for the land which is presently owned by Beatrice A. Harper, Bertha A. Maples, Herman Barnes Aycock, W.W. Harper and Frank Overman.  Barnes built a home here.  It was here that Thomas took his bride.  Here they reared their family.

In November of 1898, Bettie was baptized a member of the Church of Jesus Christ of Latter-Day Saints.  Prior to her husband’s death the December before, he had investigated the church.  It was he who invited the missionaries to their home.  On the day of her baptism Bettie sent a note to the children’s teacher asking that they be excused from school that afternoon to see the baptism.  The teacher wrote back a letter which expressed her feelings quite vividly.  She said she would as soon see someone turned over to a pack of wolves as see her baptized a member of such a church.  She felt it her duty to warn her of this awful thing.  Nevertheless, Bettie was baptized and as her children became of age they, too were baptized.

Bettie’s home was the office for the North Carolina District at the time Ben Rich was Mission President.  It was here she and her children met many missionaries as they would come and go.  Elder Charles A. Callis was one of them.  Because she opened her home to the missionaries, she was criticized by people of the community and some of the school board members questioned the suitability of her home for the school teachers who had boarded there for many years.  A good friend on the board refused to let them withdraw her home from the recommended list.

The family attended meetings in what was then called and is now fondly remember by some, the Meadow Meetinghouse.  It still stands at the edge of Johnston County.  It was here the North Carolina District Conferences were held and as many as forty and fifty missionaries met and were accommodated by the people in and around the community.  Tithing receipts issued to Bettie and her family show Bethel Branch, North Carolina District.

Because of the death of her husband two months before the birth of her youngest child, Bettie was left with a family of seven to provide for.  One year after Thomas’ death, her oldest son, Rovert, left for Utah with Elder Lewis Swensen, the missionary, who had baptized her.  By renting part of the land, with the help of her children, and be living quite simply she was able to support her family quite comfortably.  They raised most of their food and canned fruits and jellies and preserves in their season.  Cotton was their money crop.  It was Ralph, another son, who later “pioneered” in tobacco raising.

Bettie was about five feet and four inches tall; she had dark brown hair and blue eyes.  She was noted for her even temper and kept her troubles to herself.

Bettie was crippled with arthritis and was on crutches for three or four years.  She had pneumonia which cleared up but left her heart so weak she was not able to recover from it.  She died in the home she came to as a bride.