My interest in writing a short story about great grandfather Stephen Smith developed while I was deeply involved with finding out whether his temple ordinances had been done.  Although I found the ordinances were completed, to my amazement I discovered that only a few sketchy pages about Stephen’s life were ever written.

A preliminary search of my father’s (George Stephen Smith) records revealed the following information – one page written by Rachel Adnerson Smith and about two pages written by Nellie Smith Orr.  The only record of his church activities mentioned was joining the Mormon Church in England after listening to the missionaries when he stopped in Logan on his way to Wyoming and had his family sealed in the Logan Temple.

After my personal visit to Cowling, Keighley, Yorkshire, England, I had the good fortune of meeting with a cousin, Jack Smith, who was kind enough to transport me around.  As we visited some of the scenes where Stephen lived early in life, the urge to write a history grew even stronger within my bosom.

After finally locating additional information about the life of Stephen Smith and his family, I wish to share it with his offspring.

My Visit to Beautiful Yorkshire

My Grandfather Stephen Smith was the son of John Smith and Elizabeth Bannister; he was born August 25, 1847, at Keighley Yorkshire England.

Stephen was tall and slender, light brown curely hair … good natured, unselfish of heart … loved and enjoyed his family and the security of home.  He acquired his music ability from his father who was a musician.  As a young boy Stephen sang in the CHurch choir in England.  I have been told by people that knew him, that he had a marvelous voice and played three different musical instruments.

The couple made their home at Keighley … four children were born to them … JOseph, John, Thomas, and Arthur (who was a twin) died when a baby.  Shortly after this sorrow had entered their lives, the Mormon Missionaries called at their home … they became interested in the gospel, excepted the truths, and were baptized into the Church of Jesus Christ of Latter Day Saints.

Grandfather came to America and was here a year before his family joined him.  After the family arrived in America, they came directly to Grantsville, located in a small log house, situated on North Street, and owned by Wrathall.  The land was finally sold, the old house torn down and a new one built by Frank Hammond … later it was sold again to Alvin Sample … It was only a short time after the families arrival here, till Grandfather bought a piece of ground, in the west part of the town, where he built a house  A year later their daughter Beatrice was born … Grandfather was then given a good offer of a job … thinking it an excelent proposition he sold his home in Grantsville and moved the family to their Star valley Idaho, and went to work for a man named Burton, who owned a store … my grandparents lived in the back rooms of this store) Burton owned a large farm, Stephen looked after the cattle and the farming.  Eventually they returned back to Grantsville, lived in a small adobe house on main street, now owned by John brown … but not for long, grandfather was appointed Supt. of the grist or flour mill and the family moved to Milton Utah.

With a wagon drawn by a team of horses, grandfather always made from two, to three trips a week, with flour for the Coop-Store and to pick up grain at the old tithing barn, at Grantsville.  It was on one of these trips that he took a heart attack and passed away before a Doctor could be summoned, this happened on Jan. 28, 1896.  I was between 3 and 4 years of age, at the time, so this information was given by my parents.

Now lets learn a little about his wif,e Martha and the family.  Grandmother was a small little lady of 4 ft. slender, brown hair, blue eyes … loved and participated in fun … an expert knitter … musical, played the organ, and uncelled on a constatina … this instrument is some what like an Accordian.

For some time after her husbands death, she stayed at Milton where he sons Thomas and Jack and a close friend Fred Miller run the grist mill, later they moved to Salt Lake City … she run a rooming house and the boys got work at the Railroad yards.

We will visit this little adobe house at Milton Utah, as it were when I stayed with them when a girl.

The living room … beautiful woven rag carpet on the floor, the crisply curtained windows .. the Reed organ … the plush seates with chairs to match … the small low rocking chair, grandmothers favorite … and the two larger rocking chairs for the family … the beautiful old fashioned center table, with a fancy oil lamp hanging directly above it from the ceiling … pictures of friends and loved ones … keep-sakes from England … it had quite an effect on me .. as a little girl it was the most fascinating parlor. In one of the other rooms stood a wash stand with a pitcher and bowl standing on top … directly above hund a mirrow and a shelf for the comb and hair brush … the cook stove, kept so shiny and black, one could almost see your own reflection in it.

The love of good music was instilled in the children and the evenings were spent in singing pretty folk songs and hymns … when Jack (John) played the organ, grandmother played the constantina.  Tom, the violin.  Everybody sang … and I would fall asleep … then uncle Jack would rouse me, saying Helen my girl its your turn to sing for us” … here, here, my sleepy head, play us that organ solo … so with one foot on the pedal I’d pumpw ith all my might, while my fingers roamed the key board with its teeth of black and white.  To me it sounded pretty, but to them it was a fright (no doubt)

This home had that welcome hospitality, they seemed to have a knack of making people feel at home.  Folks from around the adjoining towns and farms came in for tea, or to spend a delightful evening.

The house stood east of the grist mill, (which is till standing and used as a feed and grain mill, flour is not milled there as it was in the past) … however the house has fallen to decay, some of the fruit trees that surrounded it are there … many times Beatrice an dI have played house in the shaded coolness of them … the wonderful boat rides on the old mill pond … guess its why I like boats … and if I had been blessed a boy, would have no doubt spent my life at sea.

As I look back across the years it seems but yesterday that I went with my parents to Salt Lake City to stay, while mother took care of grandmother who was very ill.  The trip was made by team in a covered wagon, took all day to make this journey … there was snow on the ground and the weather was chilly … grandmother quietly passed away Jan. 4, 1904 was buried at Grantsville, beside her beloved husband. 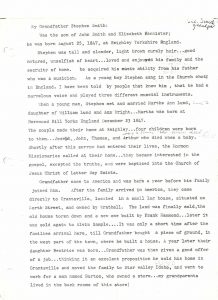 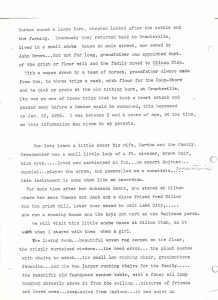 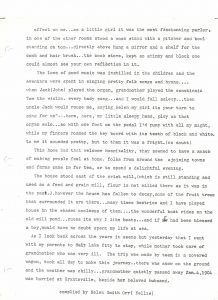