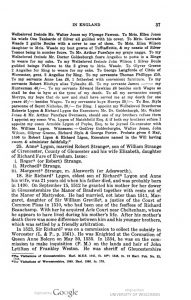 18.  Sir Richard Lygon, eldest son of Richard Lygon and Anne his wife, was 21 years old when his father died, and was probably born in 1490.  On September 15, 1512 he granted his mother for her dower in Gloucestershire the Manor of Bradwell together with rents out of the Manor of Mattysdon.  He had married, not later than 1511, Margaret, daughter of Sir William Greville, a justice of the Court of oommon Pleas in 1510, who had been one of the feoffees of Richard Beauchamp  With her he acquired Arle Court near Cheltenham, where he appears to have lived during his mother's life.  After his mother's death there was some difference between his and his younger brothers, which was settled by a friendly arbitration.
In 1523, Sir Richard was on a commission to collect the subsidy in Worcester ... He was Knighted at the Coronation of Queen Anne Boleyn on May 30, 1535.  In 1534, he was on the commission to make inquisition ... on the lands and heir of John Lytilton of Frankley Weston.  He was sheriff of Gloucestershire 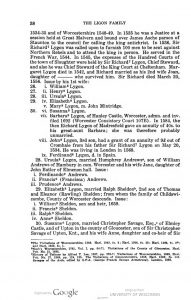 1534-35 and of Worchestershire 1548-49.  In 1535 he was a Justice at a session held at Great Malvern and bouund over James Asche parson of Staunton to the council for calling the king antichrist.  In 1536, Sir Richard Lygon was called upon to furnish 100 men to be sent against Northern Rebels and to attend the king in person.  He served in the French War, 1544.  In 1545, the expenses of the Hundred Courts of the town of Slaughter were held by Sir RIchard Lygon, Chief Steward, and also he was Chief Steward of the King Court at Cheltenham.  Margaret Lygon died in 1542, and RIchard married as his 2nd wife Joan, daughter of --------- who survived him.  Sir Richard died March 20, 1556.  Issue by his 1st wife: 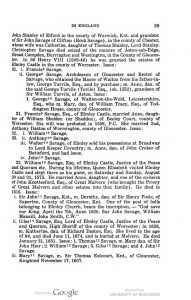 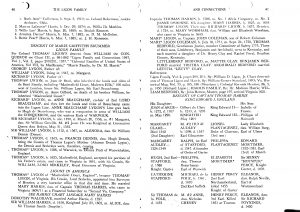 Richard Lygon, m. Anne Beauchamp, co-heir of 2nd Lord Beauchamp, and thru her the lands and titles of Beauchamp came into the Lygon Line. Anne Beauchamp Lygon's Line goes back to Hugh de Beauchamp, who was a companion in arms of William the Conqueror, and the vaious Earls of Warwick

Thomas Lygon, b. 1625, Madresfield, England, accepted his portions of his Father's estate, and came to Virginia in 1641, with his Cousin, Sir William, Lord Berkeley, Royal Governor of Virginia.

Thomas Lygon of "Madresfield Court, England", became Thomas Ligon of VIrginia. His Cousin, Lord Berkeley, appointed him Surveyor of Henrico, a very lucrative office in that day and time. He married Mary Harris, dau. of Captain Thomas Harris, who came to Virginia 1609 as a Financial Subscriber to "Second Va. Company." 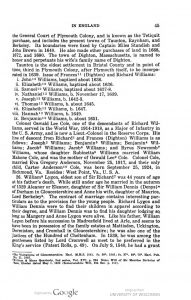 26. William Lygon, eldest son of Sir RIchard was 44 years of age at this father's death.  While still under age he married in the autumn of 1529 Aleanor or Eleanor, daughter of Sir William Dennis (Denys) of Durham in Cloucestershire and Anne his wife, daughter of Maurice, Lord Berkeley.  The contract of marriage contains interesting particulars as to the provision for the young people.  Richard Lygon and William Dennis were to find their children in apparel according to their degree, and William Dennis was to find his daughter lodging so, long as Margery and Anne Lygon were alive.  Like his father, William Lygon before his succession to Madresfield lived at Arle, and seems to have been in possession of the family estates at Mattisdon, Uckington, Dormiston, and Cromhall in Gloucestershire; he was also one of the justices of the Hundred of Cheltenham.  In 1538, he was among the gentlemen listed by Lord Cromwell as meet to be preferred in the King's service (Patent Rolls, p. 49).  On July 9, 1540, he had a grant

of the Manor of Redgrove, late of Llanthony Abbey.  In 1544, William Lygon was in the army against France and is shown in the Vanguard with 10 foot (pp. 154 and 158).  This was the time when Henry VIII invaded France and captured Boulogne but soon afterwards made peace with Francis and returned home (Hume, Vol. III. p. 60) His father Sir Richard Lygon furnished 60 foot (L & P, F & M. Vol. XIX)  He was sheriff of Worcestershire in 1550-51 and in 1560-61; his agreement on the second occasion with Walter Hooke, keeper of the gaol at Worcester, is preserved.  He is described as William Lygon the elder when acquiring land of Gilbert Staple at Madresfield in 1557, and William Lygon the younger, who received seisin, was presumably his eldest son.  William Lygon died on September 29, 1567; his wife survived him and in June, 1568 was living in Arle; she was still alive in 1579.  Issue:

William Lygon's will reads as follows:
"I bequeath 40s. to Austin Friars in London where the bodies of my father and other ancestors be buried.  I have bought of the King the ward and marriage of the body and lands of John Berkeley, son and heir of Richard Berkeley, late of Stoke, Gifford.  The said John when 21, to marry my niece Isabel Denys, and if she refuses then her sister, Elynor, then sister Margaret.  Or Maurice, brother of John, to marry one of the nieces.  Dame Katharine, my wife: Thomas, son of Heir of Sir THomas Berkeley, my brother to be my heir, Maurice, his brother to be next heir in succession.  My brother, William Denys and John FItzJames to be Executors." 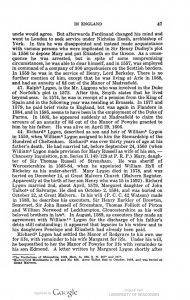 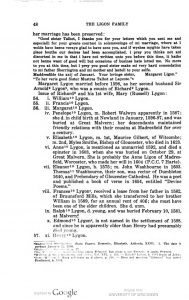 Issue of Richard Ligon and his 1st wife, Mary 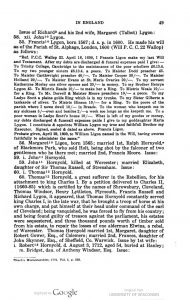 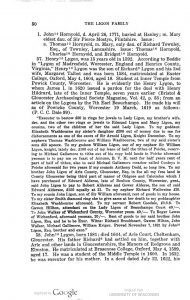 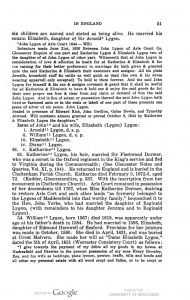 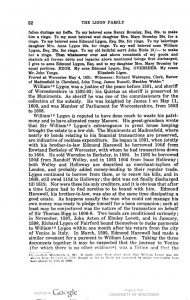 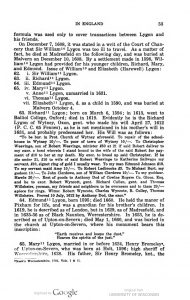 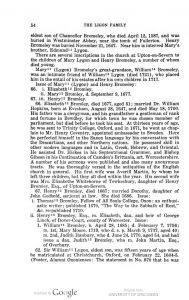 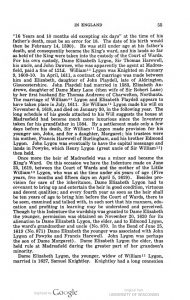 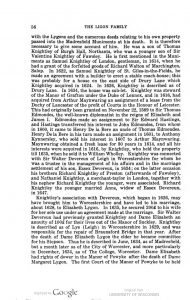 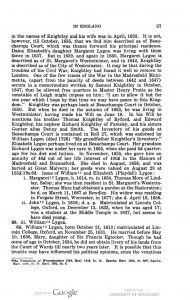