A Study of the Emigrants and Emigration in Colonial Times: to which are added Lists of Passengers to Boston and to the Bay Colony; the Ships which brought them; their English Homes, and the Places of their Settlement in Massachusetts 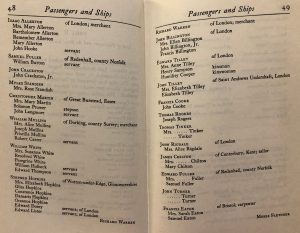 Lists of Passengers and the Ships which Brought Them

MAYFLOWER of London, two hundred tons, Christopher Jones, Master.  Left Southampton August 5, and arrived at Cape Cod December 11, with one hundred and one passengers.  The ship was detained at Darmouth and Plymouth, England, about two weeks for repairs to her consort, the Speedwell.  The entire company settle at Plymouth. 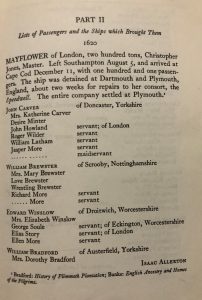 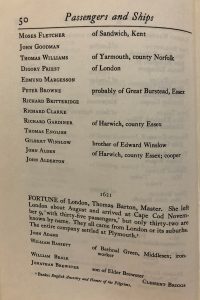 p85 LYON.  This ship was famous in the history of the early emigration to assachusetts, and her Master was equally noted for his skillful seamanship and his sympathy with the policy of the Purtian leaders.  In 1630, 1631, and 1632 she made four voyages hither in quick succession under his command with the regularity and safety of a ferry, and on one of them saved the new settlement from starvation and death by her timely arrival with provisions and anti-scorbutics.  The official connection of the Lyon with the Winthrop Fleet is of the same characgter as related of the Mary and John, as both were doubtless approved by the Governor and Assistants.  In his letter of March 28, 1630, to his wife, written from the Arbella, off the Isle of Wright, after noting the sailing of the Mary and John, Winthrop wrote: 'and the ship which goes from Bristowe (Bristol) carrieth about eighty persons.'  This was the Lyon and she probably sailed from that port to accomodate passengers living in the West Counties - Lancashire, Cheshire, Warwick, Gloucestershire, and Somerset.  That they were authorized to settle in the limits of the Bay Patent seems assured as there is no evidence to the contrary following their arrival.  The date of her departure is not known (probably in March) but her arrival at Salem is reported 'in the latter part of May,' some time before the Arbella reached that port.  The identifty of this ship is not established as there were several of her name in existence at that period.  In view of her valuable services to the Colony it is to be hoped that the necessary search may be made to fix her home port, previous history, tonnage, and ownership.

Of Captain William Peirce, her Master, more particulars are known.  He had sailed to Plymouth in 1623 as Master of the Anne of London, bringing the last lot of passengers to the Pilgrim settlement.   He was then a resident of Ratcliffe, parish of Stephney, London, and at that date was about thirty-one years old.  He mad a voyage to Salem in 1629 as Master of the Mayflower (not the Pilgrim ship) and thereafter he was in constant traffic in passengers and merchandise across the Atlantic.  He took up his residence in Boston in 1632 and was admitted freeman May 14, 1634.   His wife, Bridget, joined the church February 2, 1632/3; perhaps a second wife, as a William Peirce, mariner of Whitechapel, was licensed in 1615 to marry Margaret Gibbs.  Whitechapel and Stepney are adjoining parishes.  He became a Town and Colony official and was engaged in coastwise shipping thereafter.  He compiled an Almanac for New England which was the second issue in 1639 from the Daye press at Cambridge.  In 1641 he was killed by the Spaniards while on a voyage to the island of New Providence, Bahamas Group, whither he was taking passengers for settlement. 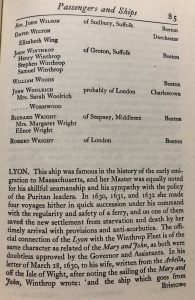 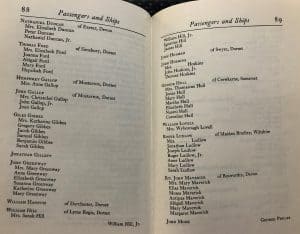 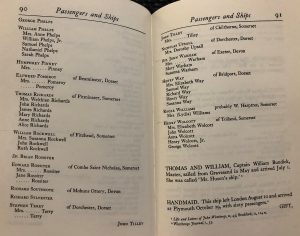 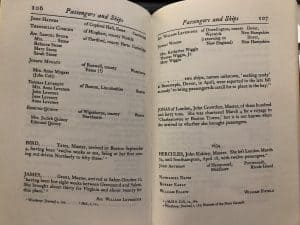 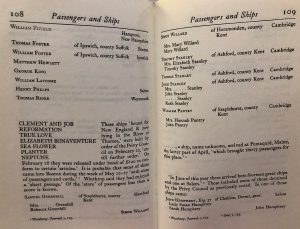 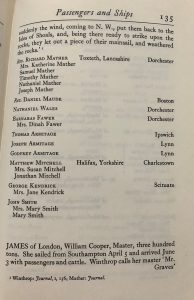 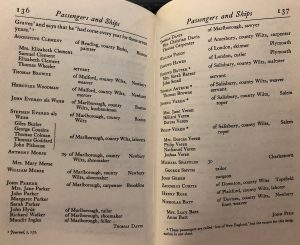 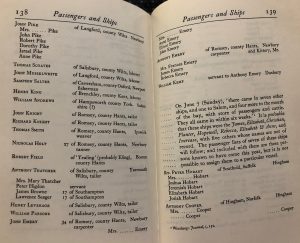 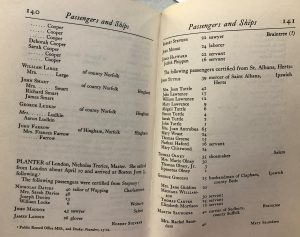 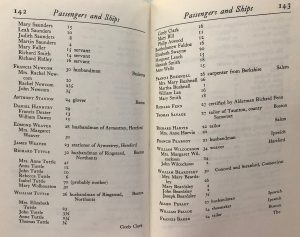 The following passengers certified, but no place stated:

Elizabeth and Anne, Roger Cooper, Master.  She sailed about the middle of May and arrived at Boston in Midsummer, with one hundred and two passengers. 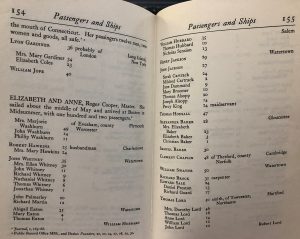 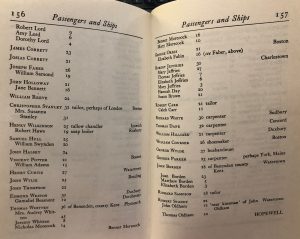 Abigail of London, Richard Hackwell, Master. She listed passengers ofr New England from June 4 until July 24, and sailed from Plymouth, as her last port of departure, about August 1, with two hundred and twenty person aboard and many cattle.  She arrived at Boston about October 8, infected with smallpox.  Among those coming in this ship, but not listed, were Sir Henry Vane, son and heir of Sir Henry Vane, Comptroller of the King's Household, traveling incongnito; the Reveraend Hugh Peter, pastor of the English Church at Rotterdam, and the Reverend John Wilson, who was returning to Boston, with his wife, her first appearance in New England. 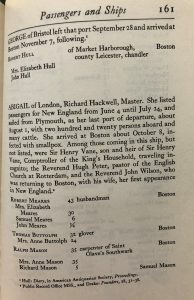 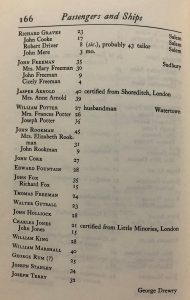 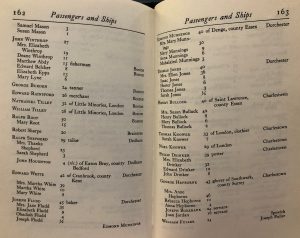 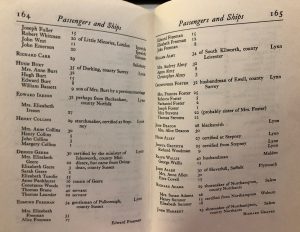 ROSE of Yarmouth, William Andrews, Jr., Master
The following named passengers sailed in these two ships from Ipswich, and arrived June 8 at Boston.  It is not possible to allocate them to either ship and they are combined in this way. 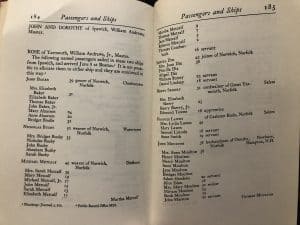 DILIGENT, of Ipswich, John Martin, Master.  She sailed from Ipswich, Suffolk, in June and arrived August 10 at Boston, with about one hundred passengers, principally from Hingham, Norfolk, destined for Hingham, Massachusetts. 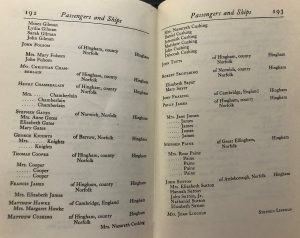